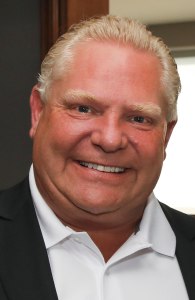 It is difficult to be in leadership during the COVID-19 pandemic. Some politicians, including B.C.’s John Horgan, have high approval ratings. Others, notably, Alberta premier Jason Kenney and Saskatchewan’s Scott Moe have failed dismally in their tasks, and Kenney especially is paying for it in sinking popularity.

Which brings us to Ontario’s premier Doug Ford. Last winter, in the early days of the pandemic, Ford seemed to bring a kind of populist earnestness to the task, but it soon wore thin. Remember his well-wishing send off last March, telling Ontarians to “have fun” and “go away” during the break? That was just when the World Health Organization was declaring a pandemic.

Ford’s public relations ritual began early, and it persists. Most days the premier, several of his cabinet ministers, and one or another of the public health doctors, walk stiffly into a media briefing, resembling a group of tin soldiers. The premier takes the podium and usually keeps it, pronouncing his message and answering most of the questions.

Not all premiers do it that way. In B.C., for example, it is Dr. Bonnie Henry, the chief medical officer, who presides at the daily news briefings. Adrian Dix, the health minister, usually stands respectfully off to one side. Premier Horgan has obviously delegated these important tasks to his competent colleagues. He sees no need to be constantly in front of the cameras. Not so with Ford.

Then, there was the constant, almost Trumpian hyperbole. Here, I paraphrase loosely: “I’m going to get right on it; just watch me; we’ll roll out the best pandemic response that you’ve ever seen; you can count on that; I’ve got your back.”

Ford is also fond of shifting blame to government employees for his failure to deal adequately with the pandemic. Early on, he regularly expressed his frustration with the civil service and promised, figuratively, to kick ass. It was as though he were an opposition critic demanding action, and not the premier who is supposed to provide it.

This was especially apparent in his attempts to shift responsibility for the appalling number of deaths among the elderly in Ontario’s long term care homes. The premier seemingly believed that people working in the system were failing him. Yet it was Ford whose government all but suspended the inspection of long-term care homes following his victory over Kathleen Wynne and the Liberals in 2018. It is Ford and the the CEOs, not the workers, who have failed us.

It became apparent that COVID-19 was being spread within long term care homes by part-time workers who were so poorly paid that they had to take jobs at multiple locations. Why? It is cheaper for the corporate owners to hire part-timers because they can more easily be denied benefits. Many of those workers were being paid only the minimum wage. Premier Kathleen Wynne planned to raise that wage. When Ford took office, one of his first acts was to cancel the scheduled increase.

There is a desperate shortage of personal care workers in long term care homes. That is hardly surprising given the poor wages, working conditions and the danger involved. After the pandemic struck, experts and analysts said that one solution lay in raising the wages of personal care workers, Ford grudgingly agreed to do so, but only for a few months.

No to sick pay

A devastating second wave of the pandemic has now struck. The virus is being spread in various workplaces and employees are taking it home to their families. Too many people cannot afford to stay away from work even if they are sick. Doctors and mayors in the greater Toronto and Hamilton areas have pleaded with the province to ensure that workers have paid sick leave. Ford has repeatedly refused, using the old dodge that the federal government should do it.

Vaccines have now arrived, but there has been a pause in the supply purchased by Ottawa as the Pfizer factory in Belgium is being retooled to increase production. Ford has used this as an opportunity to take another pot shot at Justin Trudeau, and to spew bravado about how he would have lobbied the Pfizer’s CEO: “I’d be up that guy’s ying-yang,” and “on him like a blanket.”

This is more of Ford’s posing as the fearless defender of the little guy. When it comes to performance in distributing even the vaccines on hand, Ontario has lagged most other provinces; and it shut down vaccinations over Christmas.

Doug Ford is our fearless defender, yet he passed legislation which will make it more difficult for families to sue long term care corporations for negligence in the deaths of their elderly loved ones from COVID-19.

Ford is the same defender whose government recently awarded the ghoulish former Premier Mike Harris the Order of Ontario, the province’s highest honour. As premier, Harris provided hundreds of millions to support the privatization of long-term care. Upon his retirement, he went to work for the industry. He now pulls down about $240,000 a year as board chair for one of the largest companies, Chartwell Retirement Residences.

Doug Ford does not protect us from those companies. He protects them. All bluster aside, he is one of them. Always was.